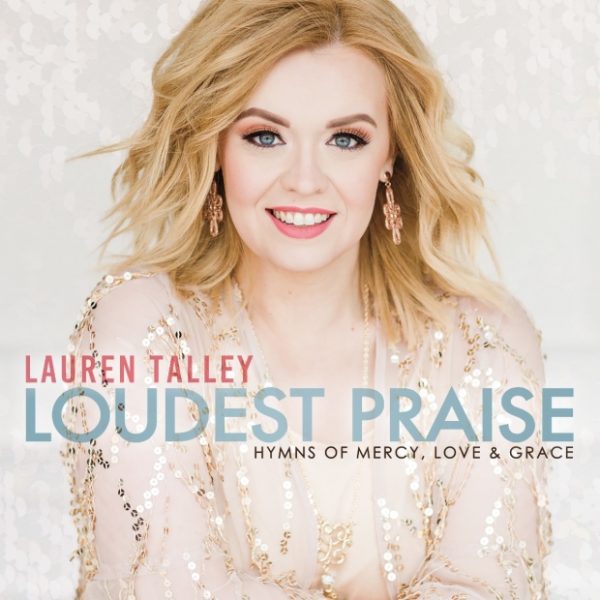 With her powerful, soulful voice, Lauren Talley is inspiring heartfelt worship and praise with two new albums: Loudest Praise: Hymns of Mercy, Love, and Grace, and Glorious God: Songs of Worship and Wonder. Both will be available August 16 from Horizon Records.

Talley, who has one of the most dynamic voices in Christian music, brings her talent to beloved hymns, reminding of their timelessness and eloquence for worship.

The album begins with the hopeful “Come Thou Fount Of Every Blessing,” andTalley inspires awe of Christ with her vocals. Serving as inspiration for the album’s title, this hymn sings of God’s never-ceasing mercy and grace.

Talley brings soul to “When God Dips His Love In My Heart,” with her upbeat rendition of the Cleavant Derricks song, before slowing it back down with “When I Survey The Wondrous Cross.”

Other hymns include “What A Friend We Have In Jesus” and “Does Jesus Care.”

Loudest Praise closes with the first single, “His Eye Is On The Sparrow.” Talley’svoice fits the power of the cherished hymn’s lyrics, as the song builds to a mighty end.

Talley captures the awe Christ inspires on this album of some of today’s most loved worship songs, beginning with the first song which inspired the title.

“Glorious God” shares the creation story and recognizes all God created to give us the lives we live. It’s a reminder that God’s presence is all around, everywhere we go.

“What A Beautiful Name/Agnus Dei” follows and continues the theme of recognizing Christ’s power through all the works He’s done. Backed by the Voices Of Lee choir from Lee University, you will feel you are in the presence of God worshipping along with them.

“Let The Glory Come Down” is an upbeat song with a contemporary feel featuringTalley backed by two of the strongest vocals in Gospel music, Amber Eppinetteand Chris Allman.  It’s sure to make people get on their feet.

Other tracks include “Mercy Tree,” “The Heavens Are Telling,” “Jesus At The Center” and “Jesus Only Jesus.”

Glorious God closes with “A Wretch Like Me,” a worship song penned by Talleyand based on the lyrics of “Amazing Grace.” It sings, “Praise God for grace that saved a wretch like me,” bringing the album full circle with its message of wonder at all God is.

While the music of these two albums is different in feeling, both accomplish the same thing: A moving sense of God’s presence and His role in our lives.

About Lauren Talley
Lauren Talley is one of Christian music’s most dynamic talents and has inspired a generation of young people to serve the Lord.

Born into a rich musical heritage, Lauren sang her first solo at age 2 when she toddled onto the stage, interrupted her family’s concert and announced she wanted to “thing.” Lauren went on to make her own mark on the gospel music world as a member of her family group, The Talleys, with whom she received numerous awards, including a 2015 Dove Award for their song, “Hidden Heroes.” Lauren’s lead vocals shine on eleven number one hits for the group.

She has recorded five solo albums, her most recent being the highly touted 2017 release, “The Gospel,” which displays her skills as singer, producer, and songwriter. She is also the author of “Songs In The Night,” a companion devotional book to her 2010 album of the same title. Lauren performs solo concerts and is a featured singer and speaker for many women’s conferences and special events across the country. She is frequently recognized for her appearances on numerous Gaither Homecoming videos and concerts, RFD-TV’s “The Music City Show” and “In Touch” with Dr. Charles Stanley. In 2014 she was awarded an honorary doctorate degree in Worship Arts from John Wesley University.

When not traveling or recording her own music, Lauren often serves as studio background singer and producer for other recordings and works with emerging artists as a voice and performance coach. Lauren is a busy lady but always finds time to cheer on her beloved Tennessee Volunteers, drink sweet tea and spend time laughing with family and friends.

“My job as a communicator is to give people the truth of the Gospel,” Lauren says. “I want people to know that Jesus is everything – He’s the Answer the world is searching for, He’s the solution to all problems and He’s the only One in whom we have real hope. He called me to give people His message when I was 12 years old, and fulfilling that call is all I’ve ever really wanted.”