Rhapsody Of Realities – Live Above The Systems 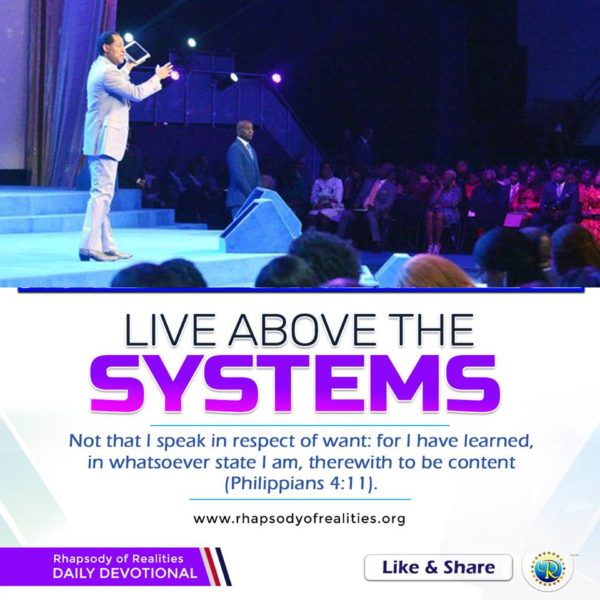 Not that I speak in respect of want: for I have learned, in whatsoever state I am, therewith to be content (Philippians 4:11).

The life the Master lived here on earth was so impressive. Jesus was far removed from the decadence of the world, the penury around Him and the corruption and failure of His society. He lived far above, and beyond the government and systems of the day when He walked the earth.

We don’t find Jesus interfering with their politics or trying to do something about their economy. In other words, He didn’t bring some strange or heavenly currency into their system, yet He was never limited by money. Money was His slave. He was self-sufficient. Whatever He required, He didn’t need to call out to heaven; He brought it forth from within.

This is the life that He’s given us: He’s made us self-sufficient, to function above and beyond the systems of this world. He said you’re in the world, but not of the world. That means you’re not to be ruled, dominated or influenced by the systems, that is the crippling and corrupting influences in today’s world. You play by a different set of rules. Many around you may be influenced, and provoked to compromise as a result of the corruption in today’s world, but be like Jesus. Be independent of circumstances.

Think and talk like Paul, who said, “But my God shall supply all your need according to his riches in glory by Christ Jesus” (Philippians 4:19). In the eleventh verse, while in prison, he wrote: “Not that I speak in respect of want: for I have learned, in whatsoever state I am, therewith to be content (independent of circumstances) ” (Philippians 4:11). He was self-sufficient. Furthermore, he said, “I can do all things through Christ which strengtheneth me” (Philippians 4:13).

Refuse to be enslaved by the system of this world; live above and beyond it. That’s the only way. Learn God’s Word and operate a law that’s higher than the law that runs in the systems of this world. Job 22:29 says, “When men are cast down, then thou shalt say, There is lifting up….” Keep your head up high and maintain your faith-composure. When it seems like you’re beginning to feel the pressure, don’t give in; keep doing the Word. Shut yourself in and talk the Word. Hallelujah!

I live above the economy and economics of this world. I’m immune to the hardships, corruption and decadence that ravage the lives of men. I live in the Word, and therefore, in victory and triumph always, in Jesus’ Name. Amen.

CAC Living Water Daily Devotional – The Permissive Will Of God (I)