Rhapsody Of Realities – The Word: A Sure Foundation 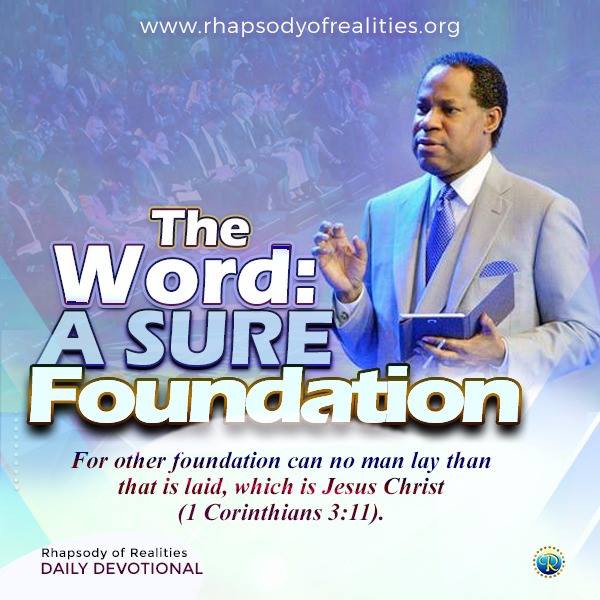 For other foundation can no man lay than that is laid, which is Jesus Christ (1 Corinthians 3:11).

The Bible tells us how Peter healed the lame man at the gate of the temple called Beautiful. Even though the man had been in that condition from birth, Peter knew that the Word could transform him. And as he made a demand in the Name of Jesus, the man was completely healed (Acts 3:1-8). If the Word could change the life of an adult man who was crippled from birth, it can change anybody.

The Word of God has the ability to make a sick man well, turn a sinner into a saint, and a failure into success. Trust the Word. Put it to work in your life. When you live according to the Word, you’re building your life on a sure foundation.

The Lord Jesus alluded to this in Matthew chapter seven. First, He talked about a certain man who heard the Word, believed, and acted accordingly. He likened that man to someone who built his house on a solid rock—a firm foundation. When the crises of life struck, when the adversities and pressures of life beat vehemently against that house, it remained standing.

Secondly, He likened those who hear the Word but don’t put it to work to a man who built his house upon the sand, and when the winds and storms billowed against it, it came to shambles (Matthew 7:26-27).

A lot of people struggle with their faith because they don’t operate by the principles of the Word. Many have founded their lives on the assumptions and theories of men, rather than on the Word of God. Your foundation should be God’s Word. Jesus said, “Heaven and earth shall pass away: but my words shall not pass away” (Mark 13:31).

Unlike this world and everything in it, you can rely on the Word; it’s infallible, immutable; the Word is eternal. Build your life on the Word, and not on human philosophies that change with the times.

PRAYER
Dear Father, thank you for the Word, which is my sure and firm foundation; upon it I rest secured and immovable, strengthened, rooted and grounded. Your Word is the rock that holds me, for it’s absolutely trustworthy, reliable, and true. Thank you Lord, for my triumphant life in, and through the Word, in Jesus’ Name. Amen.

CAC Living Water Daily Devotional – The Permissive Will Of God (I)