[Video] Thank You For It All – Marvin Sapp 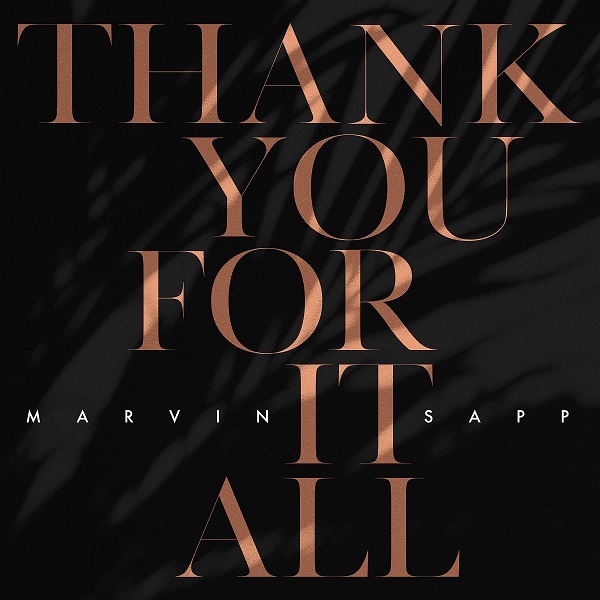 Multiple award-winning Gospel superstar Marvin Sapp releases an impassioned new song and video with ‘Thank You For It All’.

Available now at digital music providers and launched to Gospel radio, Sapp’s soaring voice is a reassuring balm on the track, thanking God for His ever-present guidance and providing strength to survive through difficulties and pain. The 11-time GRAMMY® Award nominated, 24-time Stellar Award-winning vocalist, songwriter, and producer, recorded “Thank You For It All” live earlier this year at his sold-out album recording at his new church, The Chosen Vessel Cathedral in Fort Worth, TX.

Marking his first new single since releasing his chart-topping GRAMMY® nominated album Close in 2017, “Thank You For It All” will be featured on his upcoming new album Chosen Vessel. The song was composed by Sapp, Jarmone Davis, Christopher Thomas Leach and frequent collaborator, GRAMMY® Award winner Aaron Lindsey.

Marvin Sapp says: “This song epitomizes the season we are in. Through the good and the bad, the ups and the downs, the pandemic and the protests, being people of God means we are rooted in thankfulness to our merciful Father, regardless of our circumstances.”

In addition to his new single and upcoming album, Marvin Sapp is also featured on the recently released star-studded charity single “Come Together,” created by GRAMMY®-winning hit maker Rodney Jerkins and benefiting COVID-19 relief efforts. Sapp also made a surprise appearance on Verzuz – The Healing, singing his enduring classic “Never Would Have Made It.” He joined Kirk Franklin, Fred Hammond, and Bishop T.D. Jakes for the celebrated May 31st special edition of the hit Instagram live series created by Swizz Beatz and Timbaland.