It Is Time To Overflow I ~ Pastor E.A Adeboye 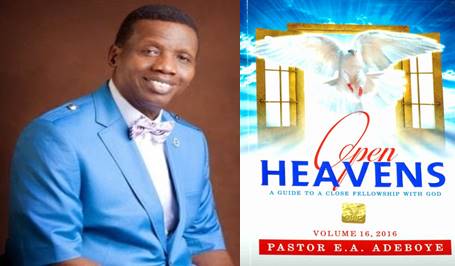 Memorise: Beloved, I wish above all things that thou mayest prosper and be in health, even as thy soul prospereth. – 3 John 1:2

10 So David would not remove the ark of the LORD unto him into the city of David: but David carried it aside into the house of Obededom the Gittite.

11 And the ark of the LORD continued in the house of Obededom the Gittite three months: and the LORD blessed Obededom, and all his household.

God is not a poor God, He is wealthier than we can ever imagine. He owns all the natural resources on earth, all the gases in the air and all the elements in the universe, just to mention a few. Can you imagine if scientists are able to get a tiny piece of the sun. Imagine how much they will sell it at an auction. The Almighty God owns the entire sun and all elements in the universe.  A God as rich as this will definitely give His children more than enough resources to take care of their needs. He lacks nothing, so His children should lack nothing too. However, this is not the case in reality. We see many Christians these days wallowing in poverty for years, in fact, many unbelievers don’t want to become born again because they are afraid of poverty. God is not happy with this. More often than not, these Christians are the cause of their own predicament.

God in His Word has given us several instructions and principles that will guarantee our wealth, but He will not force us to practice them, we have to do them ourselves to see them manifest. For example, in Luke 6:38, Jesus Christ Himself said:

“Give, and it shall be given unto you; good measure, pressed down, and shaken together, and running over, shall men give into your bosom. For with the same measure that ye mete withal it shall be measured to you again.”

Whenever I see Pastors trying hard to convince people to give, it hurts me, because if every Christian has the understanding of this passage, they will constantly compete to give the biggest offering. The Bible says also in Proverbs 11:24:

“There is that scattereth, and yet increaseth; and there is that withholdeth more than is meet, but it tendeth to poverty.”

This implies that if you want to increase, sow seeds. Also, the second part of this verse tells us that there is a certain amount that is necessary to be withheld. Many Christians don’t save. They eat like every day is their last day on earth. This is wrong; if we want to lend to nations like the Bible promises, then we must learn from Joseph’s strategy, he saved 20% of everything they got in Egypt, after a few years, nations from all over the world were coming to Egypt for food.

Key Point: God’s plan for us is that we overflow in wealth, we are to control the world economy, but if we don’t read and follow His instructions, that may be impossible.