Memorise: He that sitteth in the heavens shall laugh: the Lord shall have them in derision. – Psalm 2:4

10 Now when Daniel knew that the writing was signed, he went into his house; and his windows being open in his chamber toward Jerusalem, he kneeled upon his knees three times a day, and prayed, and gave thanks before his God, as he did aforetime.

11 Then these men assembled, and found Daniel praying and making supplication before his God.

12 Then they came near, and spake before the king concerning the king’s decree; Hast thou not signed a decree, that every man that shall ask a petition of any God or man within thirty days, save of thee, O king, shall be cast into the den of lions? The king answered and said, The thing is true, according to the law of the Medes and Persians, which altereth not.

13 Then answered they and said before the king, That Daniel, which is of the children of the captivity of Judah, regardeth not thee, O king, nor the decree that thou hast signed, but maketh his petition three times a day.

14 Then the king, when he heard these words, was sore displeased with himself, and set his heart on Daniel to deliver him: and he laboured till the going down of the sun to deliver him.

15 Then these men assembled unto the king, and said unto the king, Know, O king, that the law of the Medes and Persians is, That no decree nor statute which the king establisheth may be changed.

16 Then the king commanded, and they brought Daniel, and cast him into the den of lions. Now the king spake and said unto Daniel, Thy God whom thou servest continually, he will deliver thee.

17 And a stone was brought, and laid upon the mouth of the den; and the king sealed it with his own signet, and with the signet of his lords; that the purpose might not be changed concerning Daniel.

The Lord of hosts never loses a war. If He gives up a battle, it is because He wants to use that medium to win a war. Our God is always full of surprises. When Daniel’s enemies were plotting against him, God knew about it but He kept quiet. By the time Daniel fell into their trap and was thrown into the lion’s den, God did nothing about it. After the entrance to the lion’s den was shut behind Daniel, everyone thought he was finished. By the following morning however, God sprang some surprises on them all. The fellow they thought was dead and digested in the bellies of the lions came out alive. You are coming out from wherever the enemies placed you – alive, stronger, richer and better! All the mischief makers who thought Daniel’s case was closed received a rude shock: his case was reopened, and what they thought was in their favour turned against them. That case that was decided against you in your office or in your extended family shall be revisited in Jesus’ Name! What they thought was closed shall suddenly be reopened. The Lord will spring surprises on your enemies this season! In addition, the table turned for Daniel’s enemies. Not only were they now to become food for the lions, so also were their family members. This season, all those plotting against you shall be completely wiped out! None of them shall escape in Jesus’ Name!

Another surprise God sprang on the enemies of Daniel was that, by the reason of Daniel’s miraculous deliverance from the lion’s den, the God of Daniel became officially recognised and feared all over the kingdom as the true and living God. In Daniel 6:26, the king said,

“I make a decree, That in every dominion of my kingdom men tremble and fear before the God of Daniel: for he is the living God, and stedfast for ever, and his kingdom that which shall not be destroyed, and his dominion shall be even unto the end.”

Beyond this, after the coast was clear, Daniel prospered in the kingdom. He remained relevant in the corridors of power in successive governments and was recognised as a man that could not be ignored.

If you are prepared to pay the utmost price for the Kingdom of God, you can be sure you will receive divine compensation beyond your imagination. How are you living today? Can you take a stand for the Lord in righteousness and refuse to compromise with sin?

Prayer Point: Father, upturn every case the enemy has judged and concluded against me, my loved one and members of my local assembly in Jesus’ Name.

Were They Genuine? ~ Pastor William Kumuyi 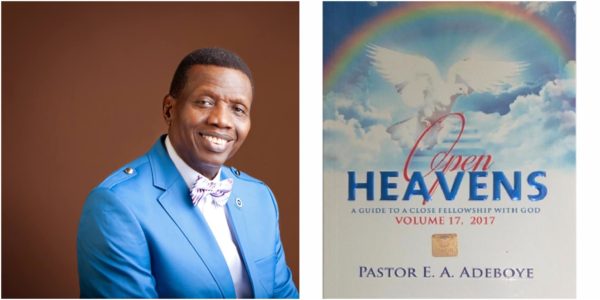 Open Heavens – What Do You See?

Fruitfulness: A Must! ~ Pastor E.A Adeboye