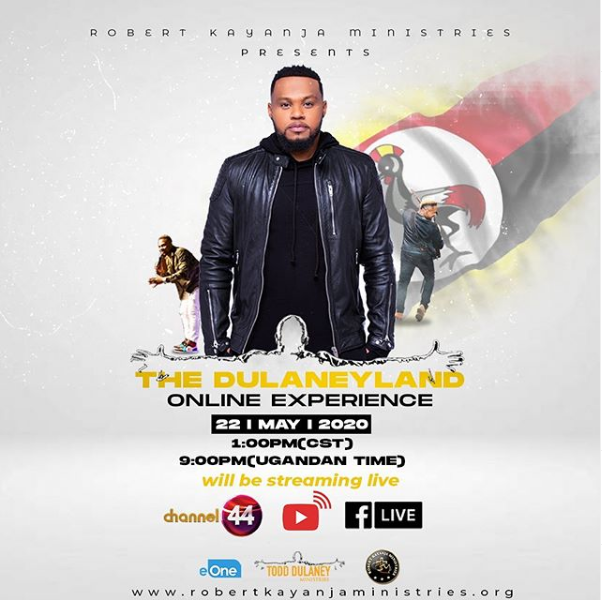 In conjunction with Robert Kayanja Ministries a Mega church in Kampala, Uganda; American Gospel singer and song writer, Todd Dulaney presents the ‘The Dulaney Land Online Experience‘ to hold on May 22, 2020.

The eOne Recording artist announces on social media via his Instagram page to stream the program live on both Youtube, Channel 44 (DSTV Uganda) and Facebook Live, amid the ongoing outbreak of the corona virus pandemic and lockdown order.

He wrote: “@robertkayanjaministries and #DulaneyLand  wanna take the whole globe and enter in at one time!! @dstvuganda  @onenashvilee  May 22nd”.

Todd Anthony Dulaney popularly known as just ‘Todd Dulaney’ is an American Gospel Musician and a former baseball player whose outmost dream is to write music which ministers to the heart of God and touches the heart of man.

His musical career started in 2011 with his Album, ‘Pulling Me Through’ and since then released other albums such as ‘A Worshipper’s Heart’ (2016) which hit No.1 on the Gospel Albums Chart and ‘Your Great Name’ (2018).

Todd Dulaney has also shared the stage with many award winning artistes including Donnie McClurkin, Tye Tribette, Vanessa Bell Armstrong amongst others and has earned three nominations for the 2012 Stellar Awards and Grammy Award for best Gospel Album.